Since I've been preaching on being a missional church, I've been reading and dipping into a lot of books on mission, evangelism, and apologetics. Here's a few thoughts about some of them. 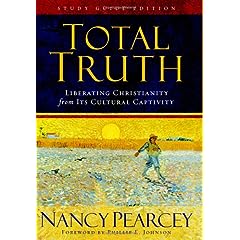 Total Truth: Liberating Christianity from Its Cultural Captivity (Study Guide Edition) by Nancy R. Pearcey is an extremely helpful book on constructing a Christian worldview. Pearcey (building on a previous book co-authored with Chuck Colson, How Now Shall We Live?, which I haven't read yet) lays in the groundwork of a Christian worldview (creation, fall redemption) and shows how this counters other worldviews (e.g. Darwinian naturalism, Marxism, etc.). She also shows how got to where we are as a culture with our dualistic tendency to divide sacred and secular and how this has shoved Christian thinking out of public discourse and into the private realm of values. Pearcey traces this all the way back to Platonic dualism and up through Aquinas's Aristotelian method of theology with its nature-grace distinctions (this was quite helpful to me, giving me a better handle on Thomsim than I've had before) into the way the Evangelical awakenings of the 18th and 19th centuries set us up for anti-intellectualism in the contemporary church. This is simply a fascinating read! Pearcey was a student of Frances Schaeffer and writes with stunning clarity and an easy prose. I really like this book and look forward to reading the prequel soon!

The Reason for God: Belief in an Age of Skepticism by Tim Keller came in the mail Friday afternoon and I devoured it by Saturday afternoon! This may have been the book I was most eager to read in 2008 and it wasn't a disappointment. Keller's book is written for both believers and skeptics and addresses the seven most common objections people have to Christiantiy: (1) There can’t be just one true religion; (2) How could a good God allow suffering?; (3) Christianity is a straitjacket; (4) The church is responsible for so much injustice; (5) How can a loving God send people to hell?; (6) Science has disproved Christianity; (7) You can’t take the Bible literally. Then Keller builds a case for the plausibility of Christiantiy in seven chapters. This book is so good, it could become the Mere Christianity of the twenty-first century. Here's what I like about Keller. He speaks the language and understands the mind-set of postmoderns, because he has worked with them, witnessed to them, and pastored them for nearly twenty years in Manhattan. But he is orthodox in his theology, not shying away from the exclusive claims of Christ, the substitutionary nature of the atonement, or the eternality of hell. He is also a gifted communicator, drawing from an amazing breadth of philosophy, literature and pop culture. This one's a keeper. I'll read it again and hope lots of others will read it too.

I'm still working on The Gospel in a Pluralist Society by Lesslie Newbigin.

Perhaps the main virtue of the book is that it comes from a man who broke new ground in missional thinking for churches in the West. I like Newbigin's style. He reads a lot like Martyn Lloyd-Jones. But Newbigin is definitely further left on certain issues than I am, so I could not recommend him without qualification.
Confessions of a Reformission Rev.: Hard Lessons from an Emerging Missional Church by Mark Driscoll is a fun

read (so far, I'm about 2/3 through) from a cutting-edge practioner and leader in the missional church movement. This is Driscoll's second full-length book and it traces the story of the planting and growth of Mars Hill in Seattle. There is not a lot of original thinking from Driscoll on the philosophical level. But there are loads of practical insights to be drawn from Driscoll's trial and error "confessions." Warning: Driscoll is edgy, even offensive sometimes. Some readers won't like his sarcasm and sometimes irreverent humor. But his heart comes through and after reading about Driscoll's experiences, my respect for him is even higher than before.

I have only dipped into Telling the Truth: Evangelizing Postmoderns, edited by D. A. Carson, but what I've read is excellent! This is a collection of essays that originated in a conference on evangelism hosted by Trinity Evangelical Divinity School, InterVarsity Christian Fellowship, Campus Crusade, the Navigators, and others in 1998. Contributors include Ravi Zacharias, Phillip Jensen (author of Two Ways to Live), Ajith Fernando, Mark Dever, James Sire, and many, many others. Topics range from "An Ancient Message, through Modern Means, to a Postmodern Mind" and "Communicating Sin in a Postmodern World" to "The Lifestyle of the Great Commission" and "Authentic Church-Based Evangelism in a Relational Age." There are twenty-eight chapters in all, divided into eight parts. The main reason I bought the book was to get Carson's chapter on Acts 17, "Athens Revisited." That chapter alone was worth the price of the book, but there is much more to gold to mine from these pages.
Posted by Brian G. Hedges on Tuesday, February 19, 2008

Total Truth is one of my favorite books.

Oh man, there are loads here that sound interesting.... :)

But I'll have to wait to borrow until after I finish the stack I have already. I haven't had nearly the time to read on our trip that I thought I would. Oh well. We've been doing lots of meetings/visitings and that's been great.

What are you qualifications for Newbiggin? I am reading through a series of lectures he did.

Newbigin is an inclusivist - that's the main problem I see with him. But his ideas about contextualization are really helpful.