The Cross of Christ by John Stott (Book Notes) 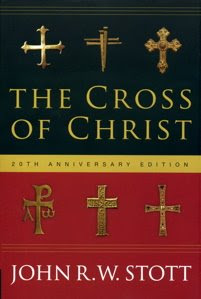 Today I’ve been digging into John Stott’s great book The Cross of Christ. Here are a few choice quotes that could help spark your own reflection on the cross this week.

Christians believe that in and through Christ crucified God substituted himself for us and bore our sins, dying in our place the death we deserved to die, in order that we might be restored to his favor and adopted into his family. (p. 7)

The cross transforms everything. It gives us a new, worshipping relationship to God, a new and balanced understanding of ourselves, a new incentive to give ourselves in mission, a new love for our enemies, and a new courage to face the perplexities of suffering. (p. 11)

There is . . . no Christianity without the cross. If the cross is not central to our religion, ours is not the religion of Jesus. (p. 68)

At the cross in holy love God through Christ paid the full penalty of our disobedience himself. He bore the judgment we deserve in order to bring us the forgiveness we do not deserve. On the cross divine mercy and justice were equally expressed and eternally reconciled. God’s holy love was ‘satisfied’ . . . Divine love triumphed over divine wrath by divine self-sacrifice.(p. 89, 159)

Why did God take our place and bear our sin? What did he accomplish by his self-sacrifice, his self-substitution? The New Testament gives three main answers to these questions, which may be summed up in the words ‘salvation,’ ‘revelation’ and ‘conquest.’ What God in Christ has done through the cross is to rescue us, disclose himself, and overcome evil. (p. 167)

Only one act of pure love, unsullied by any taint of ulterior motive, has ever been performed in the history of the world, namely the self-giving of God in Christ on the cross for undeserving sinners. That is why, if we are looking for a definition of love, we should look not in a dictionary, but at Calvary. (p. 212)

The very purpose of [God’s] self-giving on the cross was not just to save isolated individuals, and so perpetuate their loneliness, but to create a new community whose members would belong to him, love one another and eagerly serve the world. This community of Christ would be nothing less than a renewed and reunited humanity, of which he as the second Adam would be head. (p. 255)

The cross is not just a badge to identify us, and the banner under which we march; it is also the compass which gives us our bearings in a disorientated world. In particular, the cross revolutionizes our attitudes to God, to ourselves, to other people both inside and outside the Christian fellowship, and to the grave problems of violence and suffering. (p. 256)

I could never myself believe in God, if it were not for the cross. The only God I believe in is the One Nietzche ridiculed as ‘God on the cross.’ In the real world of pain, how could one worship a God who was immune to it? I have entered many Buddhist temples in different Asian countries and stood respectfully before the statue of the Buddha, his legs crossed, arms folded, eyes closed, the ghost of a simple smile playing round his mouth, a remote look on his face, detached from the agonies of the world. But each time after a while I have had to turn away. And in imagination I have turned instead to that lonely, twisted, tortured figure on the cross, nails through hands and feet, back lacerated, limbs wrenched, brow bleeding from thorn-pricks, mouth dry and intolerably thirsty, plunged in God-forsaken darkness. That is the God for me! He laid aside his immunity to pain. He entered our world of flesh and blood, tears and death. He suffered for us. Our sufferings become more manageable in light of his. There is still a question mark against human suffering, but over it we boldly stamp another mark, the cross which symbolizes divine suffering. (p. 335-336)

The cross it the object of our boasting. God forbid that we should boast in anything else [Galatians 6:14]. Paul’s whole world was in orbit round the cross. It filled his vision, illumined his life, warmed his spirit. He ‘gloried’ in it. It meant more to him than anything else. Our perspective should be the same. (p. 351)

Boasting in Christ and his cross alone with you.
Posted by Brian G. Hedges on Thursday, April 09, 2009