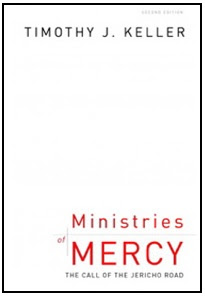 Tim Keller, in his book Ministries of Mercy: The Call of the Jericho Road, writes with insight into how the gospel differs from both Left and Right in its perspective on social justice issues. I thought these words wise, given our current economic crisis:

The ideology of the Left believes big government and social reform will solve social ills, while the Right believes big business and economic growth will do it. The Left expects a citizen to be held legally accountable for the use of his wealth, but totally autonomous in other areas, such as sexual morality. The Right expects a citizen to be held legally accountable in areas of personal morality, but totally autonomous in the use of wealth. The North American "idol" - radical individualism - lies beneath both ideologies. A Christian sees either "solution" as fundamentally humanistic and simplistic.

The causes of our worsening social problems are far more complex than either the secularists of the Right or Left understand. We wrestle not with flesh and blood, with with powers and principalities! We have seen there is great social injustice - racial prejudice, greed, avarice - by those with the greatest wealth in the country (and sadly, with the evangelical church itself). At the same time, there is a general breakdown of order - of the family and the morals of the nation. There is more premarital sex (and thus there are more unwed mothers), more divorce, child neglect and abuse, more crime. Neither a simple redistribution of wealth nor simple economic growth and prosperity can mend broken families . . .

Only the ministry of the church of Jesus Christ, and the millions of "mini-churches" (Christian homes) throughout the country can attack the roots of social problems. Only the church can minister to the whole person. Only the gospel understands that sin has ruined us both individually and socially. We cannot be viewed individualistically (as the capitalists do) or collectively (as the Communists do) but as related to God. Only Christians, armed with the Word and Spirit, planning and working to spread the kingdom and righteousness of Christ, can transform a nation as well as a neighborhood as well as a broken heart.

Interestingly, the recent Newsweek article about "post-Christian" America touches on some similar themes.

"The worst fault of evangelicals in terms of politics over the last 30 years has been an incredible naiveté about politics and politicians and parties," says Mohler. "They invested far too much hope in a political solution to what are transpolitical issues and problems. If we were in a situation that were more European, where the parties differed mostly on traditional political issues rather than moral ones, or if there were more parties, then we would probably have a very different picture. But when abortion and a moral understanding of the human good became associated with one party, Christians had few options politically."

"Only Christians, armed with the Word and Spirit, planning and working to spread the kingdom and righteousness of Christ, can transform a nation as well as a neighborhood as well as a broken heart."

Great post...
We need to bring people to a saving faith in Jesus Christ to save our nation and mend all the broken hearts.
KEEP PRESSING ON FOR THE LORD.