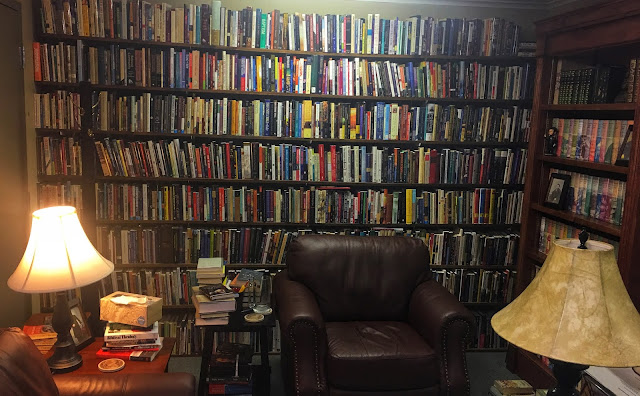 I love to read people’s best books reading lists at the end of each year and often choose several books for my reading pile based on these lists. Perhaps my list will be helpful for your pile.

Here are fifteen of my favorite books from 2019.

Note: these aren’t necessarily books published in 2019, just books that I read (or at least read portions of) last year. They are in no particular order, suggested with only minimal comment.

1. The Grace of Law: A Study in Puritan Theology by Ernest Kevan — A monumental study on Puritan perspectives on the law of God that fairly covers the antinomian controversy of the seventeenth century. One of the most thorough and helpful books on the Puritans I’ve read.

2. The True Bounds of Christian Freedom by Samuel Bolton — This volume relates to the one above, as one of the most important actual Puritan books on the law. This little book exceeded my expectations. Far from a ham-fisted defense of the third use of the law, this is a closely reasoned, carefully nuanced look at gospel, law, and freedom, organized around six questions. (1) Does our being made free by Christ free us from the law? (2) Does our being made free by Christ deliver us from all punishments or chastisements for sin? (3)Is it consistent with Christian freedom to be under obligation to perform duties because God has commanded them? (4) May Christ’s freemen come into bondage again through sin? (5) Is it consistent with Christian freedom to perform duties out of respect for the recompense of the reward? (6) Does the freedom of a Christian free him from all obedience to men? Very helpful.

3. The Conviction to Lead: 25 Principles for Leadership that Matters by Albert Mohler — Another book that exceeded my expectations. I’ve read several of Mohler’s books, but this is the only one I’ve really liked. But I like this one a lot and think it’s one of the best leadership books I’ve read.

4. The Glory and the Dream: A Narrative History of America 1932-72 by William Manchester — I listened (at 1.5x speed) to this 57+ hour audio book over many months (actually, mostly in 2018) and was enthralled every step of the way. Manchester is a masterful story-teller, and his chronicle of US history from the Great Depression to Watergate did not disappoint. Highly recommended.

5. Getting Shredded in Simple: How to Transform Your Body Quickly with Common Sense by Paul Maxwell — “Eat less. Move more. It’s that simple.”

6. Working: Researching, Interviewing, Writing by Robert Caro — Utterly fascinating memoir (sort of) from the biographer of Lyndon B. Johnson.

7. Atomic Habits by James Clear — This book builds on Charles Duhigg's excellent book The Power of Habit, as well as other research, presenting a streamlined four-step plan for building good habits and eliminating bad ones. I could nitpick and point out a few things I didn't like, but won't. It's a good book. I'm glad I read it. If you need help in forming better habits, you'll benefit from it.

8. The Name of the Wind by Patrick Rothfuss — This first volume in The Kingkiller Chronicles is a fresh, sprawling, beautifully-written epic fantasy—fiction at its best!—and was easily my favorite novel last year.

10. Batman: White Knight by Sean Murphy — Easily the best graphic novel I’ve read in a long time and fresh new take Batman. Murphy is both author and artist—and the art is amazing.

11. Institutes of the Christian Religion by John Calvin — Profound, lyrical, and worshipful. This is devotional and systematic theology at its best and remains one of my top ten favorite books of all time. This was my second time all the way through the Institutes, and my third time through Books 1-3. This year I read through using (most of the time) the read-through-a-year plan published by Alliance of Confessing Evangelicals. Well worth it.

13. Unwanted: How Sexual Brokenness Reveals Our Way to Healing by Jay Stringer — A thoughtful and compassionate book by a Christian therapist, based on his counseling experience and research of over 3800 people. I would place this alongside David Powlison’s Making All Things New, Tim Chester’s Closing the Window, and William Struther’s Wired for Intimacy, as one of the most helpful books on this difficult topic. The unique contribution Stringer makes is in connecting unwanted sexual behaviors with childhood experiences, trauma, and sexual abuse (although Powlison touches on some of this too). Well worth reading for pastors, counselors, or anyone struggling with pornography or other sexual sins.

14. Evangelism as Exiles by Elliot Clark — Based on 1 Peter and his experiences as a missionary to Muslims, Clark provides a compelling and challenging exhortation to Christians to engage in gospel proclamation.

15. The New Park Street Pulpit, volumes 1-4 by Charles H. Spurgeon — The first four volumes of Spurgeon’s 63 volumes of sermons, which I’m now slowly reading through—a multi-year project, to be sure! Urgent, evangelical, theological, convicting, encouraging. (For more detailed reviews of each volume, see my Goodreads account.) I spent a lot of time in these sermons and don’t regret one moment. Reading Spurgeon is changing my preaching.
Posted by Brian G. Hedges on Wednesday, January 01, 2020