The Knowledge of the Holy by A. W. Tozer (Book Notes) 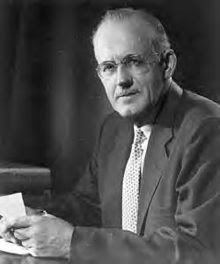 A. W. Tozer's The Knowledge of the Holy is one of the great classic works of Evangelical spirituality from the twentieth century. It is an exploration of the character and attributes of God that is both theologically sound and devotionally rich, weaving together Scripture, hymnody, prayer, and practical application, along with some of the most illuminating quotations of worshipful saints from across the centuries.

I recently completed reading it again and this time took notes. Here is a selection of some of the most helpful statements, with both chapter and page numbers (though my edition is different from the one linked above).

What comes into our minds when we think about God is the most important thing about us. (Ch. 1; p. 7)

An attribute of God is whatever God has in any way revealed as being true of Himself. (Ch. 3; p. 18)

The full sun-blaze of revelation came at the incarnation when the Eternal Word became flesh to dwell among us. (Ch. 3; p. 20)

Man for all his genius is but an echo of the original Voice, a reflection of uncreated Light. As a sunbeam perishes when cut off from the sun, so man apart from God would pass back into the void of nothingness from which he first leaped at the creative call. (Ch. 5; p. 34)

All God's acts are done in perfect wisdom, first for His own glory, and then for the highest good of the greatest number for the longest time. And all His acts are as pure as they are wise, and as good as they are wise and pure. Not only could His acts not be better done: a better way to do them could not be imagined. An infinitely wise God must work in a manner not to be improved upon by finite creatures. (Ch. 11; p. 67)

God brought His creatures into being that He might enjoy them and they rejoice in Him. (Ch. 11; p. 67)

With the goodness of God to desire our highest welfare, the wisdom of God to plan it, and the power of God to achieve it, what do we lack? (Ch. 11; p. 70)

It is God Himself who puts it in our hearts to seek Him and makes it possible in some measure to know Him, and He is pleased with even the feeblest effort to make Him known. (Ch. 13; p. 77)

Almost every heresy that has afflicted the church through the years has arisen from believing about God things that are not true, or from over-emphasizing certain true things so as to obscure other things equally true. To magnify any attribute to the exclusion of another is to head straight for one of the dismal swamps of theology; and yet we are constantly tempted to do just that. (Ch. 15; p. 85)

Now someone who in spite of his past sins honestly wants to become reconciled to God may cautiously inquire, 'If i come to God, how will he act toward me? What kind of disposition has He? What will I find Him to be like?' The answer is that He will be found to be exactly like Jesus. 'He that hath seen me,' said Jesus, 'hath seen the Father.' (Ch. 16; p. 90)

The greatness of God rouses fear within us, but His goodness encourages us not to be afraid of Him. To fear and not be afraid - that is the paradox of faith. (Ch. 16; p. 91)

Mercy is an attribute of God, an infinite and inexhaustible energy within the divine nature which disposes God to be actively compassionate. (Ch. 18; p. 97)

As mercy is God's goodness confronting human misery and guilt, so grace is His goodness directed toward human debt and demerit. it is by His grace that God imputes merit where none previously existed and declares no debt to be where one had been before. (Ch. 19; p. 100)

No one was ever saved other than by grace, from Abel to the present moment. Since mankind was banished from the eastward Garden, none has ever returned to the divine favor except through the sheer goodness of God. And wherever grace found any man it was always by Jesus Christ. Grace indeed came by Jesus Christ, but it did not wait for His birth in the manger or His death on the cross before it became operative. Christ is the Lamb slain from the foundation of the world. The first man in human history to be reinstated in the fellowship of God came through faith in Christ. In older times men looked forward to Christ's redeeming work; in later times they gaze back upon it, but always they came and they come by grace, through faith. (Ch. 19; p. 102)

God is love and God is sovereign. His love disposes Him to desire our everlasting welfare and His sovereignty enables Him to secure it. (Ch. 20; p. 106)

God's holiness is not simply the best we know infinitely bettered. We know nothing like the divine holiness. It stands apart, unique, unapproachable, incomprehensible and unattainable. The natural man is blind to it. He may fear God's power and admire His wisdom, but His holiness he cannot even imagine. (Ch. 21; p. 111)

We must hide our unholiness in the wounds of Christ as Moses hid himself in the cleft of the rock while the glory of God passed by. We must take refuge from God in God. (Ch. 21; p. 114)

The gospel message embodies three distinct elements: an announcement, a command, and a call. It announces the good news of redemption accomplished in mercy; it commands all men everywhere to repent and it calls all men to surrender to the terms of grace by believing on Jesus Christ as Lord and Savior. (Ch. 22; p. 120)

Email ThisBlogThis!Share to TwitterShare to FacebookShare to Pinterest
Labels: A. W. Tozer, Attributes of God, Quotes

Thanks for this post, Brian. I'm using Tozer's book with two groups of men I'm in a discipling relationship with: one group is quite a bit older; the other is quite a bit younger. Two are elders in my church; the other two have some heart's desire for ministry, whatever that means for them in God's future. This book is shaping their hearts and minds.