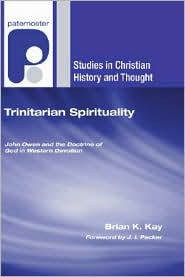 While Evangelicals are hungry for authentic spiritual experience, we are, it seems to me, rather confused about how to get it. This hunger is a good thing, evidenced by the many books now available on spiritual formation and the disciplines, not to mention the plethora of devotional guides now on the market. But evidence of the confusion is seen in the actual content of some this material.

On one hand, there is a focus on technique over theology. Richard Foster, whose Celebration of Disciplines

in many ways pioneered three decades of literature on renewed interest in the disciplines, is a case in point. In many ways, it’s a helpful book, full of practical guidance on practicing the classic disciplines. But it is so thin on theology that a Unitarian would probably find little with which to disagree in its pages.

On the other hand, even when there is theological reflection in books on spirituality, more appeal is often made to authors in the mystical and contemplative traditions than to their Evangelical and Reformed counterparts. (And this isn’t a new trend. A. W. Tozer’s Pursuit of God

, now almost fifty-five years old, freely quotes Thomas a’Kempis, Nicolas of Cusa and the anonymous The Cloud of Unknowing.) Though I have no hard evidence for it, my suspicion is that the effect of our confused attempts to meet this hunger is something like trying to satisfy a voracious physical appetite by gorging on cotton candy – it may taste good at first, but it lacks the nourishing value of a well-balanced meal.

A partial course correction may lie in an under-noticed theological monograph on the infamously difficult-to-read Puritan theologian John Owen – Brian Kay’s Trinitarian Spirituality: John Owen and the Doctrine of God in Western Devotion

(Wipf & Stock, 2008). The stated purpose of Kay’s book is “to answer the question of how the Christian doctrine of God has, and can, make an impact on Christian models of spirituality” (p. 1). Kay believes that since we practice our spiritual lives before the face of God who has rightful claims on our lives, our spirituality should therefore “be subject to external controls of divine revelation” (1). In other words, true spirituality is grounded on right theology.

Kay is particularly concerned to determine how Trinitarian theology should shape spirituality and sees John Owen as an “illustrative test case of what kinds of devotional fruit result when trinitarian doctrine is built right into the groundwork of a system of prayer and meditation” (2). Kay presents two criteria for evaluating various models of trinitarian spirituality.

Kay’s book is a thoughtful and well-informed exploration of both theology and spirituality that situates John Owen’s trinitarian spirituality in its historical context of post-medieval and post-reformation spirituality, while contrasting and comparing Owen with a broad swath of conversation partners, from Bernard of Clairvaux and Thomas a’Kempis to James Torrance, Karl Rahner, and Karl Barth.

Five Gains from This Book

. I hope this review will help direct the attention of pastors (and scholars) to this important contribution. Let me suggest five gains to be had from a careful reading.

1. The first gain is an increase in historical consciousness about the different streams of thought in Western devotion and their relationship to Puritan spirituality in general and John Owen in particular.

Too many pastors lack broad, first-hand familiarity with the people we quote so often in sermons – Meister Eckhart, Julian of Norwich, Thomas a’Kempis, Bernard of Clairvaux, Lewis Bayly, et cetera. Like the popular Evangelical books we read, we sometimes quote these writers without paying much attention to the fuller context of their teaching. And, of course, we can’t (unfortunately!) read everything. Books like  Trinitarian Spirituality

, while selective in focus, can go a long ways in helping us better understand some of the distinctives of these different writers and the larger movements of which they were part, as well as give us some guidance for further reading.

2. The second benefit of this book is a deeper understanding of John Owen’s unique contributions to Trinitarian spirituality.

This is the real focus of the book, of course, and Kay doesn’t disappoint the reader in providing fresh and insightful analysis of Owen’s work. Kay demonstrates that “Owen represents the closest pastoral appropriation of the theological trinitarianism of the Reformed scholastics,” but with emphases that are “somewhat unique when compared with other famous devotional writings of the period” (54). And, by highlighting the devotional warmth of Owen’s writings, Brian Kay also helps correct the mistaken notion, postulated by Alan Clifford and R. T. Kendall, that Owen “helped to ruin Protestant devotion by infusing it with a cold predestinarianism built upon deadening Aristotelian logic” (2).

3. A somewhat incidental gain could be in how this book furthers the discussion about the role of faith in sanctification.

In light of the recent exchange between DeYoung and Tchividjian, I found Kay’s unpacking of Owen very helpful. Kay shows how Owen’s Federal theology and Trinitarian spirituality enabled him to avoid legalistic and moralistic directives for sanctification. Owen, of course, is best known today for his practical treatments on indwelling sin, temptation, and mortification. Holiness was clearly a high priority for Owen and he didn’t shun detailed and practical guidance on how to deal with sin and pursue holiness. In some ways, Owen is the premier Reformed theologian when it comes to sanctification.

Kay contends that “there is probably no better lens through which to observe Owen’s trinitarian view of communion [with God] than his teaching on sanctification” (157). After demonstrating that Owen’s system of spirituality is “born out of a doctrine of the Trinity that recognizes historically initiated and fulfilled covenant obligations between the members of the Godhead,” Kay infers that “the great advantage is that sanctification is prevented from functionally becoming either legalistic of human-centered, since human moral energy is itself rooted in a reward to the Son from the Father…To root sanctification’s power in so steady and determined an exchange between the Father and the Son is even more potent than merely saying that sanctification is somehow generally ‘by grace’” (158). Here, I think, are fruitful fields ripe for harvest.

4. Related to this is a fourth gain, as Kay explicitly traces out the “meditative technique” in Owen’s spirituality.

. At its heart, Owen’s method calls for deep reflection on the grace and love of God. “If there is a ‘spiritual discipline’ to be drawn from Owen’s Federalism [covenant theology], this is it – to work hard to convince oneself of the Father’s determined love” (130).

But the Father’s love is expressed in the giving of the Son and the sending of the Spirit. “Because of its roots in the Trinity’s own ministrations, this is a way to practice sanctification that proves much more worship- and grace-centered than some kind of an endeavor to merely ‘imitate Christ”… This is a meditative technique to be sure, but one that has the believer glued to the divine drama for the basis of her consolation and moral energy” (160). Because Owen’s devotional method is rooted in the doctrine of the Trinity, it is also radically gospel-centered.

5. Finally, Kay’s exposition of Owen demonstrates the importance of the drama of redemption for a rich devotional life.

In contrast to both (a) the esoteric devotion of mystical spiritualities, which so easily veer into “platonic, hyper-spirituality” in their focus on immediacy and transcendence to the neglect of God’s redemptive acts in history, and (b) the “maudlin and short-lived” emotions manufactured through “revivalistic spiritualities,” which tend to rely on “sentimental music” and “forceful oratory” (198) in their attempts to produce an affective response to God, this book unpacks a biblical and attractive alternative for stirring the affections of the heart. Kay, using Owen, shows us that (in Dorothy Sayers’ words) “the dogma…is the drama” (197).

By giving sustained attention to the distinctive redemptive acts of our Triune God, our hearts are made to burn within us with the fires of love and devotion to God in a deeper way than mere exhortations and flat explanations can produce. As Kay summarizes near the end of his book (195, 197): “Emplotment captures us in a way that static explanations do not, so it should not be a surprise that a God who intends us to worship him has revealed himself in moving history . . . . The story is deep enough to tell us not only who God is, but who we are, what is wrong with us, what the cure is, and even where the Lord of the story is surely taking us in the final act. This is a story that has doctrinal content, yes, but it also has an epic power to strike the heart.”
Posted by Brian G. Hedges on Thursday, August 11, 2011