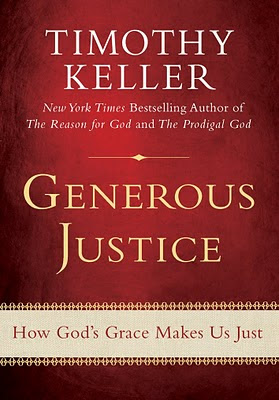 Generous Justice: How God's Grace Makes Us Just by Timothy Keller (author of the best-selling The Reason for God, and senior pastor of Redeemer Presbyterian Church in New York City) is a clear, convicting, and compelling case for the assertion that "there is a direct relationship between a person's grasp and experience of God's grace, and his or her heart for justice and the poor." (p. xiii). In his Introduction, Keller says that he wrote this book for four groups of people: (1) young Christian believers who are concerned for social justice, but often fail to let social concern affect how they spend money, conduct their careers, and choose which neighborhoods to live in; (2) orthodox Christians who approach the subject of "doing justice" with suspicion; (3) younger evangelicals who embrace social justice but jettison the traditional evangelical doctrines substitutionary atonement and justification by faith alone; and (4) unbelievers who may suspect, along with Christopher Hitchens, that "religion poisons everything" and view Christianity as one of the primary forces promoting injustice and violence. With this variety of target audiences in mind, Keller unfolds his argument for grace-driven justice in eight chapters.

Chapter one asks "what is doing justice?" and answers with an accessible study of the concepts of justice and righteousness in Scripture. While never getting overly technical, Keller shows that the Hebrew word for justice has to do with both the punishment of wrongdoing and giving people their rights (p. 3). Justice is, essentially, "to treat people equitably" - to give them their due. Such justice, which over and again in Scripture is concerned with widows, orphans, immigrants, and the poor ("the quartet of the vulnerable"), is rooted in the character of God and wedded to "righteousness." Since the biblical word for "righteous" refers to a life of right relationships, Keller says that "Biblical righteousness is inevitably 'social,' because it is about relationships" (p. 10). In fact, Keller argues that when these two words, justice and righteousness, are tied together in Scripture, "the English expression that best conveys the meaning is 'social justice'" (p. 14). Though this terminology is sometimes nothing more than a slogan used to recruit people to some political ideology or another, Keller says that "if you are trying to live a life in accordance with the bible, the concept and call to justice are inescapable" (p. 18).

Chapters two and three build the case for doing justice from the Old and New Testaments respectively. Keller carefully nuances his arguments from the Old Testament, showing that commands in the Old Testament reflect clear principles that are binding on Christians today, while granting that Scripture does not tell us exactly how to carry these principles out today. Especially helpful in this second chapter is how Keller deals with the causes of poverty, showing that Scripture doesn't neatly fit into the schemas of either liberal or conservative theorists. Rather, "the causes of poverty as put forth in the Bible are remarkably balanced" (p. 33) including oppression, natural disaster, and personal moral failures. However, Keller says, "having surveyed the Bible on these texts numerous times, I have concluded that the emphasis is usually on the larger structural factors" (p. 38). Chapter three focuses on the teaching of Jesus about justice and tackles some of the lesser known (and lesser obeyed) words of Jesus, such as those found in Luke 14:12-13 (pgs. 46-49) and Matthew 25:31-46 (pgs. 52-54).

Chapter four uses the parable of the Good Samaritan (Luke 10) to build the case that Christians have the responsibility to show mercy and do justice not only for those inside the church, but for anyone in need, "regardless of race, politics, class, and religion" - that is, for anyone who is your "neighbor" (see p. 67). This chapter, drawing heavily on the work of eighteenth-century theologian Jonathan Edwards, includes a very helpful series of answers to common objections that religious people often make when faced with the call of justice and mercy.

Chapters five asks "Why should we do justice?" "Our problem in society today" Keller says, "is not that people don't know they should share with others and help the poor. Most people do know and believe this. The real problem is that, while knowing, they are insufficiently motivated to actually do it" (p. 79). So how does the Bible motivate us? First, with "joyful awe before the goodness of God's creation" and, second, with "the experience of God's grace in redemption" (p. 82). Keller's discussion of creation focuses mainly on how human dignity (and therefore human rights) is actually rooted in the Scripture's teaching that human beings are created in the image of God. In an excellent discussion of civil rights on pages 85-88, Keller illustrates the point through interaction with the writings of Aristotle, Martin Luther King, Jr., and C. S. Lewis.

But "as important as the doctrine of creation is, the most frequently cited Biblical motivation for doing justice is the grace of God in redemption" (p. 92), a point Keller makes from both the Old and New Testaments. This is really the heart of the book, out of which everything else flows. With eloquent reason, Keller drives this truth home: "If a person has grasped the meaning of Gods' grace in his heart, he will do justice" (p. 93); "People changed by grace should go, as it were, on a permanent fast. Self-indulgence and materialism should be given up and replaced by a sacrificial lifestyle of giving to those in need" (p. 95-96); "A life poured out in deeds of service to the poor is the inevitable sign of any real, true, justifying, gospel-faith. Grace makes you just. If you are not just, you've not truly been justified by faith" (p. 99).

If chapter five addresses motivation, chapter six takes on the practical question of "how should we do justice?" In this wise and practical chapter, Keller is simple, but not simplistic, discussing how "vulnerable people need multiple levels of help" including "relief, development, and social reform" (p. 113) then providing examples of and principles for doing each. This chapter delves into issues such as the needs of poor communities, racial reconciliation, and reforming unjust social structures. Drawing on Abraham Kuyper's concepts of "sphere sovereignty," he discusses both the responsibilities of Christians in the institutional church and as the organic church. And he tackles the relationship between social justice and evangelism, arguing that "they should exist in an asymmetrical, inseparable relationship" with evangelism being "the most basic and radical ministry possible to a human being . . . not because the spiritual is more important than the physical, but because the eternal is more important than the temporal" (p. 139). But Keller will not agree that justice is simply a means to the end of evangelism OR that doing justice IS evangelism. There is a distinction between the two. Deeds of justice and mercy are not identical to gospel proclamation. To say so, is "fatal confusion." Yet BOTH are necessary. Chapter seven carries the practical questions a step further, with a judicious exploration of "Doing Justice in the Public Square."

The final chapter, "Peace, Beauty, and Justice", relates the concerns of this book to "shalom" or the reweaving the fabric of human relationships into "harmonious peace." This is God's overall intention for human beings and doing justice means "to live in a way that generates a strong community where human beings can flourish" (p. 177). But how do we do that? In one of my favorite paragraphs in the book, Keller answers: "The only way to reweave and strengthen the fabric is by weaving yourself into it. Human beings are like those threads thrown together onto a table. If we keep our money, time, and power to ourselves, instead of sending them out into our neighbors' lives, then we may be literally on top of one another, but we are not interwoven socially, relationally, financially, and emotionally. Reweaving shalom means to sacrificially thread, lace, and press your time, goods, power, and resources into the lives and needs of others" (p. 177).

The length of my review shows my enthusiasm for this book, which is a significant contribution to Christian theology and ethics. Keller’s clear and accessible style makes this book appropriate for any thoughtful believer, seeker, or skeptic. I wholeheartedly recommend it to anyone who is concerned with issues of justice in society, faithfulness to the teaching of Scripture on justice, and/or the implications of the Christian gospel for living a life of justice in our world today.

[If you found this review helpful, give a positive vote here.]
Posted by Brian G. Hedges on Wednesday, November 03, 2010