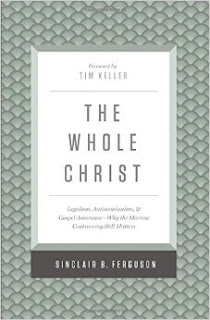 What does a Scottish theological controversy from three hundred years ago have to teach believers today? A lot. And Sinclair Ferguson (perhaps my favorite living theologian) shows its relevance to the church today in his new book, The Whole Christ: Legalism, Antinomianism, & Gospel Assurance - Why the Marrow Controversy Still Matters.

I am torn between giving this book three or four stars. Ferguson's handling of the Marrow controversy is interesting and informative and his exposé of the heart of legalism is biblical and incisive. There are some penetrating insights in this book concerning the gospel and how legalism and antinomianism are not so much opposite errors as they are "non-identical twins" that are born from the same womb, namely a distrust of the goodness of God. Ferguson explores the varied expressions of this distrust.

Some of the most striking insights in this book concern:

My qualms with the book are two:

(1) I think the book could have benefited from better editing. It was interesting, but seemed uneven in its pacing. I really wanted to read and understand this book, and therefore stuck through the difficult bits. But I could imagine lots of readers giving up earlier. Overall, I didn't feel that this book was as well-written as Ferguson's other books (most of which I've read).

(2) More importantly, I wasn't as satisfied with Ferguson's discussion of antinomianism as I was his discussion of legalism. In particular, I'm not sure he sufficiently emphasizes the discontinuity between the old covenant and new covenant and the extent to which a believer's relationship with the Mosaic law has changed. Ferguson seems to accept the traditional position of Reformed theology, which sees a fair bit of continuity between the old and new covenants. But more recent scholarship has challenged this perspective in several important ways. (I'm thinking, for example, of Brian Rosner's important work Paul and the Law in the NSBT series, published by IVP.) I would like to have seen more interaction with these varied perspectives on the law within Reformed theology.

As it stands, Ferguson's book remains very helpful with much to which I can agree. But I'm not convinced that his treatment of the law in the life of the believer is sufficiently nuanced.

Note: Readers who are interested in these theological issues, specifically legalism vs. antinomianism, might wish to consult my book Active Spirituality: Grace and Effort in the Christian Life. Unlike Ferguson, I do not discuss the Marrow controversy. But my book does address the spiritual dynamics of sin and grace, the relationship between law and gospel, and the issues of justification, sanctification, perseverance, and assurance.