Why is Christianity Such a "Bloody Religion?" 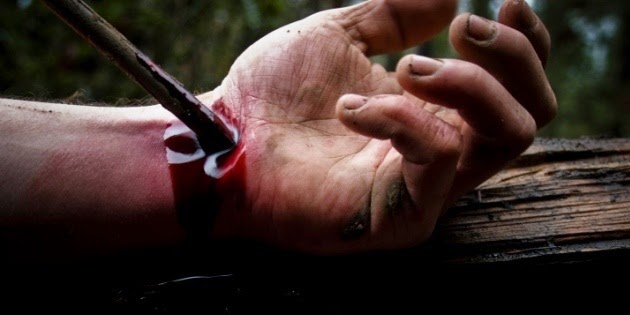 Christianity has been called a “bloody religion.” Christians have built their faith, after all, on the bloody death of the crucified Jesus. We sing with gusto, “What can wash away my sins? Nothing but the blood of Jesus!” And with the apostle Peter we confess that we have been ransomed “not with perishable things such as silver or gold, but with the precious blood of Christ, like that of a lamb without blemish or spot” (1 Peter 1:18-19).
But it is possible for us to misunderstand the significance of Jesus’ blood and even speak of it in ways that subvert the teaching of Scripture. Roman Catholic doctrine undermines the sufficiency of Christ’s finished work by teaching that his blood is offered repeatedly in a Eucharistic sacrifice. And some Protestants make a similar mistake with the supposition that Jesus continually offers his blood in heaven.
On the other hand, are those who propose that the saving efficacy of Jesus’ blood lies in some mystical or divine quality of the fluid itself, rather than his sacrificial death. This error confuses the human and divine natures of Christ and veers dangerously close to Monophysitism.[1]
Here are three propositions that summarize the teaching of Scripture about the significance of Jesus’ blood and safeguard us from error.

1. The saving efficacy of Jesus’ blood is found in his sacrificial death on the cross.

When we read about the blood of Jesus in Scripture it signifies his violent death on the cross, along with the sacrificial nature of his death. We know his blood signifies death because biblical language described death in terms of shedding blood (cf. Genesis 9:6).

Paul makes the connection between Jesus’ blood and death explicit when he speaks of Christ making peace through “the blood of his cross” and reconciling us to God in “his body of flesh by his death” in Colossians 1:20-22.[2]

But Jesus’ blood is especially connected to the idea of sacrifice. In the midst of a sustained meditation on the relationship between Christ and the sacrificial system of the Old Testament, we read in Hebrews 9:22 that “without the shedding of blood there is no forgiveness of sins.” This highlights the necessity of sacrifice for forgiveness and shows that sacrifice by its very nature involves the shedding of blood. The passage then goes on to show that Christ “has appeared once for all at the end of the ages to put away sin by the sacrifice of himself” (Hebrews 9:26).

This leads to a second proposition:

2. Jesus’ bloody sacrifice was made once for all in a single offering.

This is also especially clear in Hebrews. Consider this litany of verses:

§  Hebrews 7:27: He has no need, like those high priests, to offer sacrifices daily, first for his own sins and then for those of the people, since he did this once for all when he offered up himself.

§  Hebrews 9:11-12: But when Christ appeared as a high priest of the good things that have come, then through the greater and more perfect tent (not made with hands, that is, not of this creation) 12 he entered once for all into the holy places, not by means of the blood of goats and calves but by means of his own blood, thus securing an eternal redemption.

§  Hebrews 9:25-26: Nor was it to offer himself repeatedly, as the high priest enters the holy places every year with blood not his own, 26 for then he would have had to suffer repeatedly since the foundation of the world. But as it is, he has appeared once for all at the end of the ages to put away sin by the sacrifice of himself.

§  Hebrews 10:10: And by that will we have been sanctified through the offering of the body of Jesus Christ once for all.

§  Hebrews 10:12-14: But when Christ had offered for all time a single sacrifice for sins, he sat down at the right hand of God, 13 waiting from that time until his enemies should be made a footstool for his feet. 14 For by a single offering he has perfected for all time those who are being sanctified.

These passages clarify beyond dispute that Christ’s sacrifice was completed once and for all in his self-0ffering on the cross. Though, as our high priest, he continues to intercede for us at God’s right hand (Hebrews 7:25; Romans 8:34), there is no need for continual or repeated sacrifice. His priestly work of sacrifice is complete. The offering has been made and does not need to be repeated. In Jesus’ own dying words, “It is finished” (John 19:30).

3. This single offering has secured for us a double grace.

But one helpful way to summarize these blessings is with John Calvin’s language of “double grace.” In his Institutes, Calvin said:

Christ was given to us by God’s generosity, to be grasped and possessed by us in faith. By partaking of him, we principally receive a double grace: namely, that being reconciled to God through Christ’s blamelessness, we may have in heaven instead of a Judge a gracious Father; and secondly, that sanctified by Christ’s spirit we may cultivate blamelessness and purity of life.[3]

In other words, our union with Christ in his sacrificial death is both the basis of our acceptance with God and access into his presence, and the means of our cleansing from sin and moral transformation into the image of Christ.

This means we can confidently trust in Christ’s finished work for both the assured removal of the burden of guilt and the effective power to unshackle us from the chains of sin. The traditional theological categories for this are justification and sanctification.

The grace of justification is beautifully captured in Wesley’s translation of Zinzendorf’s classic hymn:

Jesus, Thy blood and righteousness
My beauty are, my glorious dress;
’Midst flaming worlds, in these arrayed,
With joy shall I lift up my head.

Bold shall I stand in Thy great day;
For who aught to my charge shall lay?
Fully absolved through these I am
From sin and fear, from guilt and shame.[4]

This alone is good news! But the blood of Christ not only justifies, it also sanctifies. That’s why John Owen, the great seventeenth century physical of souls, in his classic work on the mortification of sin, said, “Set faith at work on Christ for the killing of thy sin. His blood is the great sovereign remedy for sin-sick souls.”[5]

Believers have rejoiced in this double grace down through the centuries. And that’s why we joyfully sing,

Oh! precious is the flow
That makes me white as snow;
No other fount I know,
Nothing but the blood of Jesus.[6]

This article was written for Christianity.com.

End Notes
[1] Monophysitism (from two Greek words, mono (single) and physis (nature) teaches that Jesus had only one nature, rather than two natures (human and divine) united in a single person. The Council of Chalcedon condemned Monophysitism as a heresy in AD 451. For more information, see “Monophysitism,” in S. B. Ferguson & J. I. Packer, New Dictionary of Theology (Downers Grove: InterVarsity Press), p. 442.
[2] Emphasis added in this and following Scripture quotations.
[3] John Calvin, John T. McNeil, ed., Institutes of the Christian Religion