4 Lessons from Luther on Married Life (by Justin Taylor)

This, from Justin Taylor, posted at the Resurgence blog, is too good pass-up. 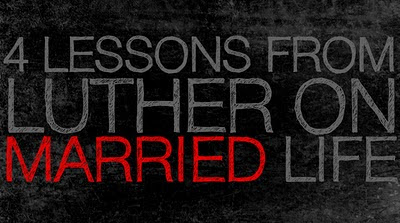 The ultimate purpose [of marriage] is to obey God, to find aid and counsel against sin; to call upon God; to seek, love, and educate children for the glory of God; to live with one’s wife in the fear of God and to bear the cross; but if there are no children, nevertheless to live with one’s wife in contentment; and to avoid all lewdness with others.

We see a number of important elements in this definition. (1) The ultimate purpose of marriage is the glory of God. (2) Children are not just the blessed by-products of marriage; they are part of the very essence of the marital design. (3) Sanctification is at the very heart of marriage. Marriage is a God-appointed means of obeying God, fulfilling our God-given desires, avoiding sin, and instructing children in the faith.

2. Think of marriage as a hospital and a school.

No marriage seminars will tell you this, but Luther will: marriage is like a hospital. You won’t find the metaphor understandable or appealing until you realize that you are sick and that you need to be healed. Here’s how Luther put it:

The temptation of the flesh has become so strong and consuming that marriage may be likened to a hospital for incurables which prevents inmates from falling into graver sins.

Luther biographer Roland Bainton picks up another metaphor in his writings:

After his own marriage Luther’s tone shifted to a stress upon the home as a school for character. It is the area where the Christian virtues find their readiest exemplification, and, whereas in Catholicism monasticism is the sphere for the cultivation of the counsels of perfection, in Protestantism the home is as it were a functional substitute.

Both metaphors—a school and a hospital—signal the important role of marriage as an agent of sanctification and rehabilitation. Our selfishness and pride are exposed. And if we respond in God-honoring humility, marriage can be used by God to cleanse us of our sin. The shift away from the monastic metaphor is also significant, for it signifies that marriage is never a purely private affair. Christian marriage is not to be of the world, but it must certainly be in the world.

3. Recognize that marital sex is good, necessary, and meant to be enjoyed!

Luther was ministering in a time when many assumed that sex was inherently sinful. Luther recognized that even those who are saved are still sinful in all areas of life—including marital sex—but he also saw the marital bed as the place for the redemption of sex.

When Luther found out that his longtime friend Spalatin was going to get married just five months after the marriage of Martin and Katie, he wrote him a note, obviously delighted that his friend would be able to experience the joy of sex with his new bride:

When you sleep with your Catherine and embrace her, you should think: “This child of man, this creature of God has been given to me by my Christ. May he be praised and glorified.” On the evening of the day on which, according to my calculations, you will receive this, I shall make love to my Catherine while you make love to yours, and thus we will be united in love.

And William Lazareth describes the joyful faith of Luther in his ideal day:

Luther’s faith was simple enough to trust that after a conscientious day’s labor, a Christian father could come home and eat his sausage, drink his beer, play his flute, sing with his children, and make love to his wife—all to the glory of God!

4. View children, and all of life, through the lens of the gospel.

Luther not only brought about, in God’s gracious providence, a reformation of how we understand the Bible and justification, and not only in how we think about marriage, but his teaching also revolutionized Reformation Europe’s understanding of children. He wrote:

This at least all married people should know. They can do no better work and do nothing more valuable either for God, for Christendom, for all the world, for themselves, and for their children than to bring up their children well.

Luther taught that of all the ministries we can be a part of, the most significant and meaningful tasks take place right in our homes.

There’s a lot of talk these days about being gospel-centered in all of life—but in reality, we’re just trying to catch up with Martin Luther’s vision of sanctifying the ordinary. After all, when’s the last time you read a meditation on how to change diapers with a gospel mindset?

Luther preached passionately on marriage for years as a single man. And likely he would have left an impact on the state of marriage even if he had remained single. But the fact that he did enter into marriage made his teaching and preaching on these issues all the more significant. It enabled Luther not only to teach God’s Word on this subject, but to model it as well.

He was not perfect—in his life, his marriage, or his teaching. But we must still thank God for Martin Luther—and also for a young nun who had the grace and courage to follow her convictions, her conscience, and the authoritative Word of Christ.

For more on Luther and his marriage, see Justin Taylor’s chapter “Martin Luther’s Reform of Marriage” in Sex and the Supremacy of Christ, edited by John Piper and Justin Taylor (Wheaton, IL: Crossway, 2005), pp. 213-244. This blog series has been adapted from that essay. You can also get a free PDF of the whole book online from Desiring God.