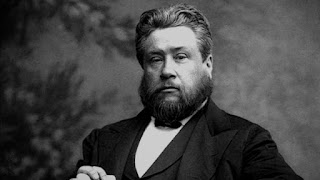 See the consequences of that sin on all sides, the world is full of them.

Yet, saith Paul, “Where sin abounded, grace did much more abound,” and he gives us this as a proof of it: “And not as it was by one that sinned, so is the gift: for the judgment was by one to condemnation, but the free gift is of many offences unto justification” (Rom. 5:16).

The Lord Jesus came into the world, not alone to put away Adam’s sin, but all the sins which have followed upon it. The second Adam has repaired the desperate ruin of the first, and much more.

By his death upon the cross, our Divine Substitute has put away those myriads of sins, which have been committed by men since the first offence in Eden.

Take the whole aggregate of believers, and let each one disburden his conscience of its load of sin.
What a mountain!
Pile it up! Pile it up!
It rises huge as high Olympus!

Age after age believers come and lay their enormous loads in this place. “The Lord hath made to meet on him the iniquities of us all.”
What Alps!
What Himalayas of sin!

If there were only mine and yours, my brother, what mountains of division would our sins make! But the great Christ, the free gift of God to us, when he bare our sins in his own body on the tree, took all those countless sins away.

“Behold the Lamb of God, which taketh away the sin of the world”!

Truly the “one man’s offence” abounded horribly; but the “one man’s obedience,” the obedience of the Son of God, hath superabounded. As the arch of heaven far exceedeth in its span the whole round globe of the earth, so doth grace much more abound over human sin.