“In whom we have redemption through his blood, the forgiveness of sins, according to the riches of his grace.” —Ephesians 1:7 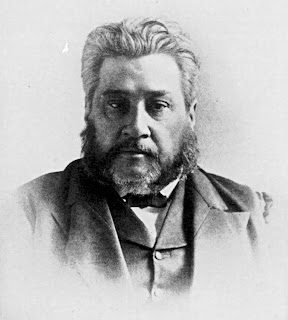 Sinner, if you trust in Christ, He will forgive you the blackest sin into which you have ever fallen. If—God grant that it may not be true!—the crime of murder should be on your conscience, if adultery and fornication should have blackened your very soul, if all the sins that men have ever committed, enormous and stupendous in their aggravation, should be rightly charged to your account, yet, remember that “the blood of Jesus Christ his Son cleanseth us from all sin” (1Jo 1:7); and “all that believe are justified from all things” (Act 13:39), however black they may be.

I like the way Luther talks upon this subject, though he is sometimes rather too bold. He says, “Jesus Christ is not a sham savior for sham sinners, but He is a real Savior Who offers a real atonement for real sin, for gross crimes, for shameless offenses, for transgressions of every sort and every size.” And a far greater One than Luther has said, “Though your sins be as scarlet, they shall be as white as snow; though they be red like crimson, they shall be as wool” (Isa 1:18). I have set the door of mercy open widely, have I not? There is no one here who will dare to say, “Mr. Spurgeon said that I was too guilty to be forgiven!” I have said nothing of the kind. However great your guilt, though your sins, like the great mountains, tower above the clouds, the floods of divine mercy can roll over the tops of the highest mountains of iniquity and drown them all. God give you grace to believe this and to prove it true this very hour!

The greatness of God’s forgiveness may be judged by the freeness of it. When a poor sinner comes to Christ for pardon, Christ does not ask him to pay anything for it, to do anything, to be anything, or to feel anything, but He freely forgives him. I know what you think: “I shall have to go through a certain penance of heart, at any rate, if not of body. I shall have to weep so much, or pray so much, or do so much, or feel so much.” That is not what the gospel says. That is only your fancy. The gospel [says], “Believe on the Lord Jesus Christ, and thou shalt be saved” (Act 16:31). Trust Jesus Christ, and the free pardon of sin is at once given without money and without price (Isa 55:1).

Another thing that indicates its greatness is its immediateness. God will forgive you at once, as soon as you trust Christ. There was a daughter, well beloved by her father, who, in an evil hour, left her home and came to London. Here, having no friends, she soon fell a prey to wicked men and became an utter wreck. A city missionary met with her, spoke faithfully to her about her sin, and the Holy Spirit brought her to the Savior’s feet. The missionary asked for her father’s name and address; and at last, she told him. But she said, “It is no use for you to write to him. I have brought such dishonor on my family that I am quite certain he would not reply to any letter.” They wrote to the father and stated the case; and the letter that came back bore on the envelope, in large text hand, the word Immediate. Inside, he wrote, “I have prayed every day that I might find my child and am rejoiced to hear of her. Let her come home at once. I have freely forgiven her, and I long to clasp her to my bosom.” Now, soul, if thou seekest mercy, this is just what the Lord will do with thee. He will send thee mercy marked Immediate, and thou shalt have it at once. I recollect how I found mercy in a moment, as I was told to look to Jesus, and I should be forgiven. I did look; and, swift as a lightning flash, I received the pardon of sin in which I have rejoiced to this very hour. Why should it not be the same with you, the blackest and worst sinner here, the most unfeeling and the least likely to repent? Lord, grant it; and Thou shalt have the praise!

Again, the greatness of God’s forgiveness may be measured by the completeness of it. When a man trusts Christ and is forgiven, his sin is so entirely gone that it is as though it had never been. Your children bring home their copybooks without any blots in them; but if you look carefully, you can see where blots have been erased. But when the Lord Jesus Christ blots out the sins of His people, He leaves no marks of erasure: forgiven sinners are as much accepted before God as if they had never sinned.

Perhaps someone says, “You are putting the matter very strongly.” I know I am, but not more strongly than the Word of God does! The Prophet Micah, speaking to the Lord under the inspiration of the Holy Spirit, says, “Thou wilt cast all their sins into the depths of the sea” (Mic 7:19). Not into the shallows, where they might be dredged up again; but into the great deeps, as in the middle of the Atlantic... “What! All my sins gone?” Yes, they are all gone if thou believest in Jesus, for He cast them into His tomb where they are buried forever!...If I am in Christ Jesus, the verdict of “No condemnation” (Rom 8:1) must always be mine, for who can condemn the one for whom Christ has died? No one, for “whom he justified, them he also glorified” (Rom 8:30). If you have trusted your soul upon the atonement made by the blood of Christ, you are [forgiven]; you may go your way in peace, knowing that neither death nor hell shall ever divide you from Christ. You are His, and you shall be His forever and ever...

Now I close by showing you how really God forgives sin. I am sure He does; for I have proved it in my own case, and I have heard of many more like myself. I have known the Lord to take a man full of sin, renew him, and in a moment to make him feel—and feel it truly too—“God loves me!” He has cried, “Abba, Father.” And he has be- gun to pray and has had answers to prayer. God has manifested His infinite grace to him in a thousand ways. By- and-by, that man has been trusted by God with some service for Him, as Paul and others were put in trust with the gospel, and as some of us also are. With some of us, the Lord has been very familiar and very kind and has blessed us with all spiritual blessings in Christ Jesus.

Now I have done when I have just said that, as these things are true, then nobody ought to despair. Come, sister, smooth those wrinkles out of your forehead. You have been saying, “I shall never be saved”; but you must not talk like that, for Christ’s forgiveness of sin is “according to the riches of his grace.” And, brother, are you in trouble because you have sinned against God? As He is so ready to forgive, you ought to be sorry that you have grieved such a gracious God. As He is so ready to forgive, let us be ready to be forgiven. Let us not leave this [subject], though the midnight hour is about to strike, until we have received this great redemption, this great for- giveness for great sin. Thus have I preached the gospel to you! If you reject it, it is at your peril...I can say no more than this. There is pardon to be obtained by believing. Jesus Christ is fully worthy of your confidence. Trust Him now, and you shall receive full and free forgiveness. The Lord help you to do so, for Jesus Christ’s sake! Amen.

From a sermon delivered on Lord’s Day evening, December 31, 1876, at the Metropolitan Tabernacle, Newington.
Posted by Brian G. Hedges on Thursday, August 30, 2012