Bonhoeffer: "too much of something for everyone" 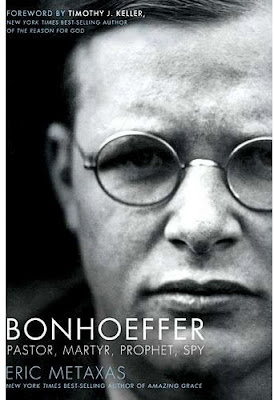 My favorite paragraph so far in Eric Metaxas's Bonhoeffer:

"He [Bonhoeffer] knew something was deeply wrong with the church as it then existed, and not just with the Reich church and the German Christians, but with the best of the church, with the Confessing Church, and with the current form of Christianity in Germany in general. He felt that what was especially missing from the life of Christians in Germany was the day-to-day reality of dying to self, of following Christ with every ounce of one's being in every moment, in every part of one's life. This dedication and fire existed among pietist groups like the Herrnhuter, but he thought that they bordered on being 'works' oriented and overly 'religious' in the Barthian sense. They had pushed away from the 'world' too much, had pushed away the very best of culture and education in a way that he didn't feel was right. Christ must be brought into every square inch of the world and the culture, but one's faith must be shining and bright and pure and robust. It must be free of cant and 'phraseology' and mere religiosity, or the Christ whom one was bringing into the world and the culture was not Christ at all, but a tawdry man-made counterfeit. Bonhoeffer advocated a Christianity that seemed too worldly for traditional Lutheran conservatives and too pietistic for theological liberals. He was too much of something for everyone, so both sides misunderstood and criticized him."
Posted by Brian G. Hedges on Friday, July 02, 2010

Great truth painted by a true wordsmith. I will look for the book while in the States. (I presently live in Kuwait where there is no freedom of speech and no Bibles or Christian literature for sale)
I also added you to my blog, Calvinistic Cartoons. Keep up the God work, pastor Hedges!

Thanks for the comment, Eddie. Hold fast in Kuwait.