The Great "Johns" of the Faith (Part 1): Calvin 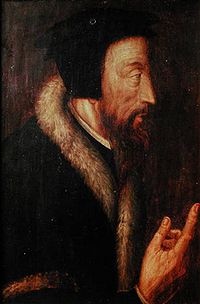 This is the first in a series of posts I plan to write called "The Great 'Johns' of the Faith." I got the initial idea from a lecture by Sinclair Ferguson. Ferguson alluded to how he had benefited from the great Johns of the church - Calvin, Owen, Duncan, and Murray. My list includes some of the same names, but also some different ones.

Over the past year I've somewhat refocused my reading and study back on to older writers. I've been enriched in my own spiritual life - as well as my understanding of Scripture and grasp of Christian doctrine. So, the reason for these posts is to pay tribute to these men who have blessed me, to articulate some of the ways that I've benefited from their writings, to thank God for them, and to encourage you to choose an old author for some of your reading next year.

So, here's part one. John Calvin.

I've been reading through Calvin's Institutes of the Christian Religion

. It is a massive book and I'm only a bit past the half way mark! I also dip into Calvin's commentaries occasionally and have skimmed a few sermons. That's the extent of my knowledge of Calvin. So this is certainly not coming from an expert or Calvin scholar. But I've benefited from what I've read and here's how.

The Institutes of the Christian Religion

is a masterfully written systematic summary and defense of the basic tenets of Christianity. I would describe it with four phrases. It is exegetical in substance, Christ-centered in focus, worshipful in tone, and polemical in style.

Calvin has been called the "father of modern exegesis" and rightly so. He pioneered the literal-historical-grammatical method of exegesis. This is especially true of his excellent commentaries, but also reflected in the Institutes. The final court of appeal for Calvin is Scripture. His arguments are laced with quotations from the Bible and one senses that Calvin was very hesitant to go further than Scripture in his surmizings.

This has really struck me in my reading Calvin (I'm now in volume 2 of this edition). Calvin's Christology was robust and it pervades virtually every page of the Institutes. This is especially true in Book III, on the way in which we receive the grace of Christ, which is especially rich. This is where Calvin's teaching on justification, sanctification and union with Christ are found, as well as his more practical teaching on the Christian life.

Despite what some people may think, Calvin is not a dry theologian. Some Calvinists could benefit from soaking in their fore-father - perhaps picking up some of his reverence and humility. Seriously, this book lifts my gaze to God. That's good enough reason to recommend it.

Along with everything above, Calvin was a polemicist, no doubt about it. This book is saucy! Calvin didn't hesitate to call his adversaries by name AND call them names. That may seem harsh to modern readers and leave a sour taste in some mouths. But even Jesus could call the Pharisees vipers and Calvin doesn't stray too far from his master in this regard. We should also remember the turbulent times in which Calvin wrote. He says in his preface that one of the reasons he wrote the Institutes was to make clear what young French pastors who were being martyred were dying for. Remember that his friends were being killed for their convictions before getting too critical of Calvin's language. But the polemics in Calvin show up most in his interaction with the dogma of medieval Roman Catholicism. Calvin takes on the exegesis of Aquinas and others and tears it to shreds. I've learned a fair bit about Roman Catholicism in reading Calvin.

This edition (see on the right) is probably the best available with helpful notes and an excellent team of scholars under J. T. McNeil behind the text. Calvin's quotations are documented and the text is keyed with symbols showing the development of the Institutes from its initial version in 1536 through its five reprints (the final in 1559). An excellent read for anyone interested in Reformed theology, historical theology, systematic theology or . . . just theology!

For a short biographical sketch of Calvin, try reading (or listening to) John Piper's The Divine Majesty of the Word: John Calvin: The Man and His Preaching.
Posted by Brian G. Hedges on Sunday, November 25, 2007

I enjoyed your post. I teach 7th grade young men at First Baptist Church of Muscle Shoals Alabama (you preached here a couple of years ago). I have just begun to read John Calvin's Commentaries in preparation for the lessons, and I see the same things in his commentaries as you noted in regard to the Institutes. It would be nice to see you back in North Alabama again. Maybe you can come to our Pastors Conference in February. Check www.anchoredintruth.org for information. Oh, and while you are at it, add us as a link. Anyway, brother, I just happened to think about you and decided to find your church on the web. I'm glad I did.
-Jeff