By Faith, Not By Sight by Richard B. Gaffiin (Book Review) 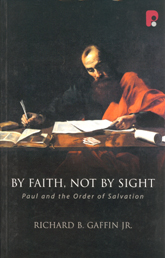 One of the gifts I received for Christmas this year is Richard Gaffin's new book By Faith, Not By Sight: Paul and the Order of Salvation. It is short (114 pages - which is how I read it so fast!), yet very, very good - one of the best books on soteriology I've read. It would be a good companion volume to John Murray's Redemption: Accomplished and Applied

(Murray was also one of Gaffin's teachers at Westminster Seminary, where Gaffin now teaches). Murray's book is an in-depth study of the atonement and the application of salvation to believers from start to finish. Gaffin's focus is slightly different, and complementary to Murray's.

After carefully defining and distinguishing the terms historia salutis (the history of salvation - salvation accomplished in history) and ordo salutis (the order of salvation - salvation applied in experience), Gaffin sets Paul's soteriological concerns within the context of his summary statements of the gospel and the gospel's nature as solution to the plight of human sin. Gaffin next tethers his comments to "union with Christ" as the center of Paul's soteriology, and then develops Paul's anthropology and eschatology, which sets the stage for reading Paul's soteriology in those contexts, so that salvation is viewed within an already/not yet framework. Then Gaffin starts connecting the dots between sanctification and eschatology, justification and eschatology, etc. in very helpful exegetical theological reflections.

Along the way, Gaffin occasionally interacts with the New Perspective on Paul, usually critically. His primary dialogue partner is N. T. Wright, with whom Gaffin delivered the series of lectures which eventually became this book, at Auburn Avenue Presbyterian Church a couple of years ago. I am not persuaded that Gaffin fully understands all the nuances of Wright's theology, but some of his criticisms of Wright are probably valid. Helpful for me was Gaffin's logical defense of the imputation of Christ's righteousness as the basis for a believer's justification. I also appreciated his refusal to polarize the individual dimensions of salvation from corporate and cosmic dimensions. Most beneficial to me was how Gaffin masterfully showed the centrality of union with Christ in his death and resurrection and the eschatological impact of those key gospel events on the believer's salvation.

Gaffin draws heavily on the work of Herman Ridderbos and has made me want to explore Ridderbos for myself. Mostly, Gaffin makes me want to read Paul more closely and discover the richness of Paul's theological perspectives on Christ's glorious accomplishment in redemption.
Posted by Brian G. Hedges on Tuesday, December 26, 2006

so if i was going to read only one book either Richard Gaffin's book or John Murray's Redemption: Accomplished and Applied which should i read?

Either/or is not a valid option. You have to read both!!!