Becoming Conversant with the Emerging Church by D. A. Carson (Book Review) 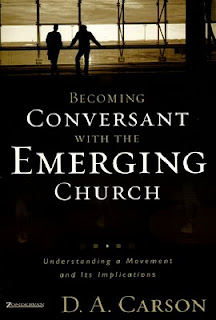 Becoming Conversant with the Emerging Church: Understanding a Movement and Its Implications
by D. A. Carson

Don Carson, research professor of New Testament at Trinity Evangelical Divinity School, has done the church a great service in this recent overview and assessment of “the emergent church,” a movement which is fast gaining momentum in evangelical culture, especially with the younger generation. Writing with both years of biblical faithfulness and a keen insight into culture to his credit, Carson presents a carefully written synopsis and evaluation of the emerging church which is both appreciative and critical. “Whenever a Christian movement comes along that presents itself as reformist,” Carson writes, “it should not be summarily dismissed. Even if one ultimately decides that the movement embraces some worrying weaknesses, it may also have some important things to say that the rest of the Christian world needs to hear” (10). Carson succeeds in both listening to the important things the emerging church leaders are saying, and bringing Scripture to bear on their worrying weaknesses.

Chapter one gives a profile of the emerging church, with Carson assuming little to no acquaintance with the emerging church from his readers. Carson has obviously done his homework on the ‘conversation,’ as his numerous references to writings by Brian McLaren, Dan Kimball, Mike Yaconelli, Spencer Burke, Leonard Sweet, Robert Webber, Dave Tomlinson, and others reveals. “At the heart of the emerging reformation lies a perception of a major change in culture” (42). This perception has led many of the emerging church leaders into protest – protest against modernism, and both traditional and pragmatic (i.e. seeker-sensitive) evangelicals, who (in their estimation) are becoming increasingly irrelevant in our rapidly changing culture. Very little appreciation or criticism is offered at this point. Instead, Carson insists that “the emerging church movement must be evaluated as to its reading of contemporary culture” (43), while its “proposals for the way ahead must be assessed for their biblical fidelity” (44).

The second chapter focuses on the strengths of the movement. In the author’s view, some of those strengths include: its honest attempts “to read the culture in which we find ourselves and to think through the implications of such a reading for our witness, our grasp of theology, our churchmanship, even our self understanding” (45); its push for authenticity in our corporate worship of God (49-51); its recognition of our own social location, that is that “we ourselves are part of this rapidly changing culture, and we cannot help but be influenced by it” (51); its concern for “evangelizing people who are often overlooked by the church” (52); and its “probing links with the [Christian] tradition” (54), casting off some traditions that are deemed unhelpful and wrong while remaining open to exploring practices that belong to the larger swath of Christendom (a strength that is also at times a weakness). But while all of these things are positive traits within the emergent church, for which we should be thankful, Carson concludes by describing one church which embodies all of these characteristics, but which is not likely to be identified with the emerging church movement. The point being, that “the emerging church movement has numerous strengths, and we should be grateful for them – but they are not exclusively theirs” (56).

Next is Carson’s summary of the emerging church’s analysis of contemporary culture. “This exercise is important because the emerging church leaders themselves ground their call to reformation in cultural changes taking place around us” (57). Several criticisms of this analysis are offered. First, Carson points out that emergent leaders tend to be overly reductionistic in their understanding of modernism. “The modern period is treated as if it were all of a piece, consistently devoted to the rational, the cerebral, the linear, the absolute, the objective. But history isn’t that neat” (59). This misreading of modernism is especially troubling because of the emerging movement’s tendency to unfairly criticize and almost universally condemn confessional Christianity. This is Carson’s second criticism. “In my reading of the emerging church literature, Christianity under modernism is rationalistic, cerebral rather than emotional, and given toward arrogance because of its absolutism” (60). Of course, examples of such can be found, but this has certainly not been universally true of all Christians within modernism. There are also examples of Christians whose firm beliefs were matched with fervent devotion to Christ. (As a case in point, Carson provides a lengthy quotation from Spurgeon.) Third, Carson takes issue with the emerging movement because its condemnation of confessional Christianity is often theologically shallow and intellectually incoherent. “It is theologically shallow because it overlooks the basic fact that no worldview, no epistemological system developed by us in a fallen world, is entirely good or entirely bad . . . It is intellectually incoherent because, in the spirit of postmodern toleration, most emergent publications go out of their way to find good things about every other ‘ism’. . . . The one ‘ism’ about which some appear to find it almost impossible to say anything positive, especially in the publications of emergent leaders, is modernism (as they understand it)” (68-69). Carson also surveys the movements analysis of postmodernism, and confesses that “in many aspects [he] agrees with [their] understanding” (75). But he does feel that they appeal too much and too carelessly to the buzz word “postmodernism” – especially given the fact that in popular culture the word (and other accompanying nomenclature) means different things to different people, while “in academic circles, the subject is beginning to look passé” (81). To lump all social changes under this one rubric, decreases the credibility of the emerging church’s analysis. And the claim that, with postmodernism, the age of authentic Christianity has arrived betrays a lack of evenhanded evaluation. Some writers need to tone down their rhetoric.

Very helpful is Carson’s “personal reflections on postmodernism’s contributions and challenges” in the fourth chapter. While this chapter requires the most effort, it is probably the most rewarding, as Carson defines and contrasts the epistemologies of premodernism, modernism, and postmodernism. In short, premodern epistemology said “knowledge depends on revelation – i.e. on God disclosing some part of what he knows, however that revelation is accomplished” (88). Modern epistemology, “a label commonly applied to the epistemology of the Western world from about the beginning of the seventeenth century until a few decades ago” (92), begins with man instead of God (Descartes’ “I think, therefore I am”) and claims that the right foundation plus the correct method would invariable yield objective truth (92-95). Postmodern epistemology, like that of modernism, begins with the finite “I,” but draws very different conclusions. It is “passionately anti-foundationalist,” meaning that “there is no ultimate fulcrum on which the levers of knowledge can rest” (97) and it “insists that there are many methods [of knowing], all of which produce distinguishable results and none of which is any more or less ‘true’ than the results produced by the other methods” (97). “Objective knowledge is neither attainable nor desirable” and under this regime, truth “cannot partake of ahistorical universality” (97). With postmodernism come several correlatives (syncretism, secularization, biblical illiteracy, ill-defined spirituality, and globalization) and entailments (98-102). Carson then details both strengths and weaknesses in postmodern epistemology, and helpfully distinguishes between what he calls hard and soft postmodernism. Hard postmodernism concludes that “human beings cannot have objective knowledge about anything” (105), while soft postmodernism, admitting that human knowledge is necessarily perspectival, still insists that “we can in measure approach the truth in some objective sense” (105-106). The appropriate place of “critical realism” (110-111) needs to be recognized and new models for helping us think explored (116-122).

Chapter five contains Carson’s most detailed critique of the emerging church movement itself. He voices five criticisms, all of them related to the movement’s handling of truth-related issues. They are (1) their failure to come to terms with the importance of non-omniscient truth-claims (126-132); (2) their failure to face the tough questions especially if they are truth related (132-138); (3) their failure to use Scripture as the norming norm over against an eclectic appeal to tradition (139-146); (4) their failure to handle “becoming” and “belonging” tensions in a biblically faithful way (146-155); and (5) their failure to handle facts, both exegetical and historical in a responsible way (155-156). Chapter six specifies this critique by carefully examining two significant books, Brian McLaren’s A Generous Orthodoxy and Steven Chalke’s The Lost Message of Jesus. Carson’s criticisms are irenic and charitable in tone, though he doesn’t hesitate to call these authors on the carpet where he deems it warranted by Scripture.

Finally, in chapters seven and eight Carson points his readers to some biblical passages to help us in our evaluation of postmodernism and the emergent church. He lists over 120 passages (some more helpful than others) relevant to truth, knowledge, and pluralism (188-202), then briefly comments on ten texts that are particularly insightful for this discussion (202-217), and concludes with an excellent biblical meditation on truth and experience, grounded in a chapter-length exposition of 2 Peter 1. Scripture, subject, and name indices are included at the end of the book.

Having been both stirred and troubled in reading several books on postmodernism and the emergent church, I came to this book with high hopes of being guided by this biblically faithful, contemporary scholar. I was not disappointed. Carson helped clarify my understanding of both modernism and postmodernism, seemed to resonate with the emergent church in some of its positive features, and was well able to articulate the cautions I have intuitively felt in my own reading. His research is impeccable, his knowledge of Scripture profound, his love for the church obvious, and his critique insightful. All of that to say this: if you only read one book on postmodernism and the emergent church, read this one.
Posted by Brian G. Hedges on Friday, September 30, 2005

Email ThisBlogThis!Share to TwitterShare to FacebookShare to Pinterest
Labels: Books

Thanks for your good review.

Thanks for the review. I'm going to be reading Carson's book and Brian McLaren's a Generous Orthodoxy for a paper for my internship at Capitol Hill Baptist Church. I'll keep your thoughts in mind as I do.